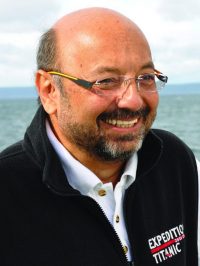 Dr. David Gallo has been at the forefront of oceanographic exploration and discovery for the past 40 years.  In 1987, he began a 30-year long career at the Woods Hole Oceanographic Institution and joined Robert Ballard’s team as Assistant Director of the Center for Marine Exploration.  In that role, Dr. Gallo worked hand in hand with scientists and engineers and was witness to the development and utilization of new technologies designed to permit exploration of the most remote and hostile locations on Planet Earth.

Dr. Gallo has participated in and/or led scientific expeditions to all of the world’s oceans and was one of the first to utilize human occupied submarines as well as remotely operated and autonomous vehicles.  In 2010, he co-led the first scientific expedition to the RMS Titanic wreck site.  In 2011, he co-led the discovery of Air France 447, an aircraft thought to be lost forever in the deep and remote regions of the South Atlantic.  Today, David is planning a return to RMS Titanic using the latest undersea imaging systems.

Whether exploring the deep sea or exploring the seas beneath the icy surface of other planets, Dr. Gallo believes strongly that there is no substitute for human presence. “Robots may be efficient but they completely lack passion and the ability to be surprised”, says Gallo.  “Emotion is the secret ingredient of exploration.”

Dr. Gallo’s efforts in exploration have been recognized by numerous organizations. He has been awarded Fellowships by the American Association of the Advancement of Science and by the Explorer’s Club of America. He is a recipient of a Computerworld-Smithsonian Award, A Lowell Thomas Medal (Explorer’s Club), and the Francis K. Hutchinsion Medal of the Garden Club of America. Dr. Gallo also serves on the board for TED, and his talk, Underwater Astonishments, is one of the most viewed TED talks of all time. He received a M.S. in Geology and a Ph.D. in Oceanography from the University of Rhode Island.