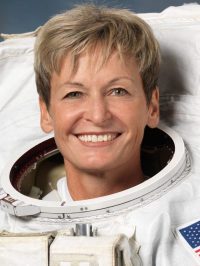 Dr. Peggy A. Whitson is a Space and Science Consultant for NSpace, LLC. She worked at NASA for 28 years before retiring in 2018, serving initially as a biochemist, negotiator and manager and 22 of those years as a NASA Astronaut. Selected to the NASA Astronaut Corps in April, 1996, Dr. Whitson flew in space on the STS-111 shuttle mission in 2002, and returned on STS-113 after a 6 month stay on board the International Space Station for Expedition 5.  She served as the first female commander of the International Space Station on her second 6-month flight in 2007-8, Expedition 16.  Her final space flight with NASA was a 9.5-month mission, spanning Expeditions 50, 51, and 52. Her cumulative 665 days in space is the US record for most time in space by an individual and she also holds the record for most spacewalks of any woman in the world, with over 60 hours. During her career at NASA, Dr. Whitson held numerous leadership roles, including Chief of the Astronaut Office (first female, non-military in that role), Deputy Chief of the Astronaut Office and Medical Sciences Division and chaired or served on 3 different Astronaut Selection Boards.